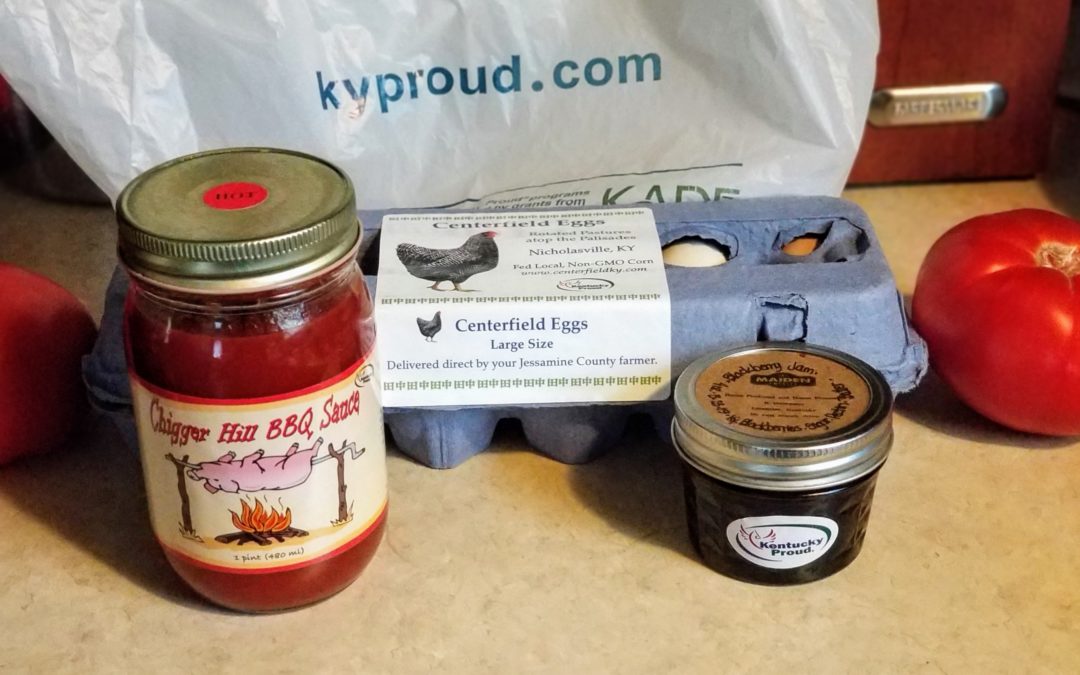 After having a very filling breakfast this morning @katiulrich and I stopped by a local farmer’s market set up. I was impressed with the selection the vendors actually had with them. Everything from your traditional produce and starter plants but even some local BBQ sauces were out.

The first vendor that we stopped at was a local BBQ sauce called Chigger Hill. We weren’t actually looking for any type of sauce like this but they guys who were out were super inviting an welcomed us over to their booth.

After introducing ourselves they offered a bit of pork BBQ they had made. Unfortunately we were both still filled to the brim from our visit to Cracker Barrel so we asked if we could instead just get a bit of the sauce on a fork to try out the flavor.

They had everything from mild, medium, hot and even an extra hot for flavoring. We started with a tasting of the medium but while it had lots of flavor it felt more like ketchup than anything with heat. We stepped it up to the hot and it was a bit more of our flavor. We probably should have tried some of the extra hot as well but didn’t want to keep making the guys bring out more for us to try.

The next stop was at a local farmer’s stand where we seen some produce we wanted to get a better look at. After a brief greeting he showcased the produce he still had available. As he showcased the last bits I realized the corner had a selection of jams. I’m a huge fan of jam so this an easy decision. I quickly grabbed the blackberry jam while Kati looked over some of the strawberry jam.

The vendor described what kind of tomatoes he had and the kinds that were going to be available in the coming weeks. I hate to admit it but I was kind of tuned out for this part. I have 0 interest in tomatoes. I find them far too bitter and usually do my best to avoid them unless they are cooked to a point the bitterness is gone. My wife on the other hand could eat them like I would eat blackberries. While I don’t like to eat them I could certainly appreciate the aroma of these and made sure I grabbed a couple for Kati.

Finally before heading out we stopped in another produce stand to look at some of their start plants. We had noticed earlier as we walked by they had a cooler of eggs so we figured why not grab a dozen to bring home. I had the opportunity to get the proprietor’s ear to ask if he knew much about bitcoin. He seemed to have heard of it but knew little and seemed to be sketched out a bit by it. I offered to help him adopt crypto into his offerings and he politely said he’d need to research more.

After reading more about Centerfield Farms from their website. I think they would be very well served to join the Steem community. I’m hoping next weekend I can stop by for another dozen eggs and offer to help them get set up here. They operate a sustainable free-roam farm utilizing local feed to feed their animals. I would love to read more and help improve their reach.

All in all it was a great little adventure out. We came home and immediately tried a bit of the jam and were blown away. I can’t wait to grab more of it next week. Hopefully I’ll get to report about new Steemians too. Who knows!