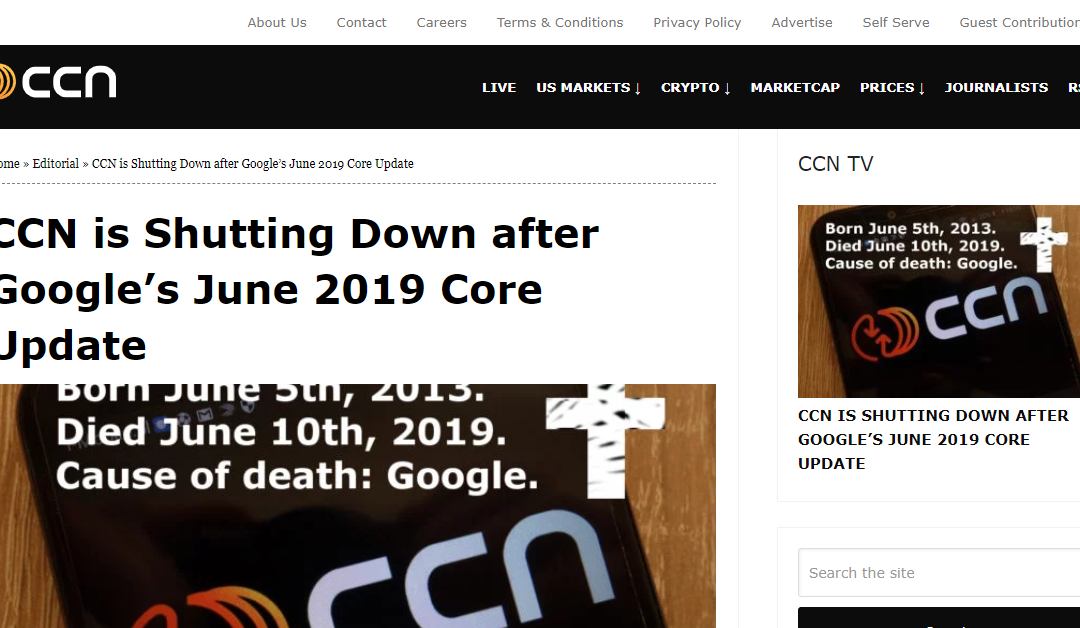 CCN.com, formerly known as CryptoCoinNews, has announced they are shutting down services after massive drops in their search volume stemming from Google’s June 2019 search updates.

This news comes less than a week after Google’s YouTube property made waves for demonetizing a range of commentators. It’s beginning to seem like relying on the search giant for your content distribution is becoming a much riskier business.

The announcement article went on to explore if this was a crackdown on crypto by Google and determined yes and no. While crypto has been heavily impacted the changes don’t seem to only affect crypto related blogs. Instead any alternative news and finance sites seem to be taking a hit while mainstream sources are picking up their gains.

My Journey With Google

I can relate to all of this. I had left most all social media to make my primary home Google+ shortly after it’s announcement in 2011. I’ve long been a Google fan boy and their focus on privacy was a huge win over the competing Facebook.

It was a good move overall. I quickly started gathering a following of like-minded individuals and enjoyed sharing to a community that seemed to have great feedback.

When Google+ decided to launch Collections as a way to revive the fledging network I was completely on-board. I quickly made my Bitcoin collection and off I went. Before long I was approaching 20K followers and then 50k. I was astonished how many people were following my writings. My growth continued on totaling over 130,000 followers before I encountered a huge setback.

One morning I logged in to share some recent Bitcoin news to find my collection had been removed. I was cited as violating the networks user policy despite no explanation for how. I quickly appealed in their formal form and on as many Google forums as possible. It would take months before I would eventually make a connection who put in a good word to one of the Google+ leads to have my collection restored.

Fortunately by the time they got around to clearing my collection I had long left for Steem. While I was never able to convert even a small portion of my following over to my Steem page I’m still happy with the move. I now have no worries about distribution drastically changing.

Now I’m able to serve content to anyone interested through my own personal website. I then am able to share this out to Steem’s decentralized network using @steempress. This ensures that anyone seeking to follow my activities can find them here without even visiting my personal site.

Not only does Steem assist with distribution but it also serves a strong function in the storage. While I’m able to maintain my personal website with near 100% uptime there may be a time when I share something that my hosting provider finds unsuitable. Even if they decide to take down my site I can still count on Steem to store the communication without regard to what I said in it.

I look forward to new social services arising that offer functionality similar to Steem. When those come out I will be utilizing them but until then and beyond I will be happy knowing that Steem is serving it’s function in my life and helping keep my voice alive!