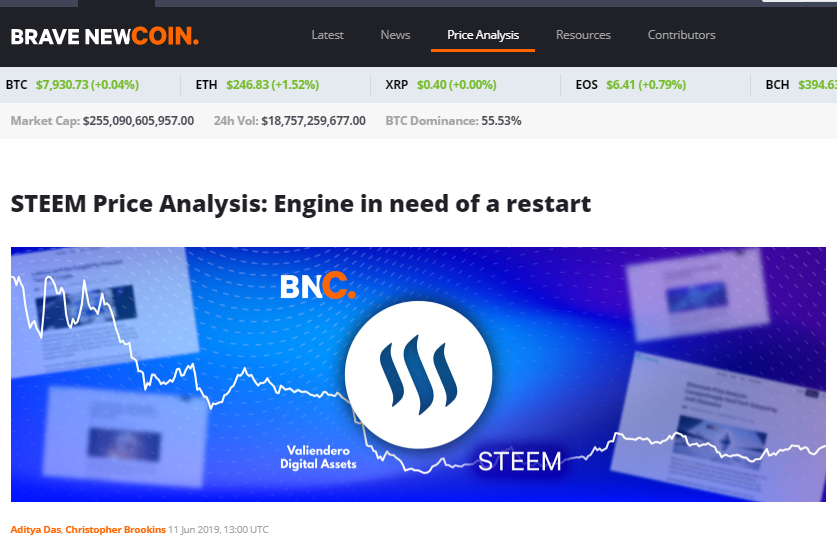 Yesterday @bravenewcoin shared a post covering Steem. I had lots of issues with the coverage and decided to write this piece to highlight what I felt wasn’t properly explained about Steem. Mind you I’m just sharing thoughts so I apologize in advance for the poor formatting and explanation! 🙂

Let me start this article by thanking BNC for covering Steem as a topic. This is in no means to discredit their efforts on reporting about Steem. Instead this is a hope to spread awareness on what Steem has become and the progress we’ve made from years past.

Before you get started you’ll probably want to read Aditya Das‘s piece over at BNC’s website called STEEM Price Analysis: Engine in need of a restart. It’s by no means biased and does a good job of highlighting a general picture of Steem. That being said there was plenty of room for improvement and hopefully this will help in that realm in the future.

Note: I will share screenshots of BNC’s original article below. You can find the original copy of this at the link above.

This piece actually originated from a discussion I started about the article on Twitter. After reading it I was triggered by the inclusion of DLive’s FUD and went to Twitter to call out BNC:

This led to Aditya Das, @dascryptoforyou, reaching out to better understand what was missed in the article. I thanked Aditya for taking the time and offered to write this piece detailing any issues I had with the write up. Now that you have the backstory let’s get started…

This was a pretty fair start to the article. I could nit pick that the actual platform of Steemit didn’t actually start until a few months after the blockchain started in March that would just be to include something to write about.

Excuse my poor highlighting skills but this is where I found my first true issue with the analysis. Their statement is that the supply of Steem doubles each year is simply not true anymore. In December of 2016 the inflation was changed to 9.5% with a decrease of .5% every year following.

The second portion of the highlighted trouble is that only 10% of Steem’s inflation is allocated for users who are creating or curating. This is also not true and is actually currently set at 75% for the two of them together.

As I’ve mentioned before, Steem changes way too often for my own personal liking. There are currently lots of talks to change this distribution for a new inflation model that includes a worker proposal system, similar to Dash’s Masternode system, as well as other changes like a potential switch to 50% curation reward / 50% post author. As of now all of these changes are still speculative and no hard fork with code change have been proposed.

This was actually the part that I led with on my Twitter response. Steem did originally have a 24 month power down cycle when I joined in July 2016. That has since changed with subsequent hard forks and now you currently are split in 13 weekly payments starting one week after your initial power down.

This was actually one of the reasons I never invested in Steem back in 2016 and stuck with Google+ as my primary social platform. It felt like waiting that long was just to get people to lock in and then exit scam out so I kept my distance until Google+ decided it was time for me to make the move.

This is just to hit a point of how often Steem is progressing and refining to meet market needs but we don’t actually have bandwidth now either. This was replaced with Resource Credits (RCs) in HF20. While very similar to bandwidth, RCs serve the means of tokenizing your available resources. While there doesn’t yet exist the ability to trade or monetize unused RC this is something that is still being developed.

More importantly I wanted to start a discussion on SMTs. These are a very hot topic within the Steem ecosystem as the community has been waiting for their release for some time. The reason I highlighted this entire paragraph is because they don’t exist yet. It was promised they were months away from a release ages ago but never came. Reading the article I felt like the author was under the impression they were currently available. The unfortunately are not.

While Steemit Inc’s lack of deliverance on this goal would normally be seen as a con, the Steem community has rose to the occasion with the release of Steem Engine. This platform is actually a second layer solution to Steem and enables most, if not all, the features that were touted to come with SMTs and a lot more. In fact Steem Engine is even in the works to add real world securities to their exchange for this second layer asset. Hint: This is a little scoop for any crypto authors who want a spicy write up! 🙂

If you know me then you know this is the paragraph that triggered me. It would take too much to detail in this post but there exists tons of evidence to showcase that DLive had intentions of utilizing their own blockchain before ever publicly launching on Steem. While DLive is supposed to exist as a seperate entity from LINO, you can find find Steem blockchain posts where the LINO founder can be seen testing the code for DLive’s Steem application. I guess this is another post I should write up sometime to showcase.

With the understanding that DLive was not without gain to trash Steem it is tough to take anything they said with any validity. I’ve long wanted to breakdown why their breakup letter was garbage excuses it might be time to plan that one soon too. Regardless even in what is said in the quoted text they are full of bologna. There were a number of “whales” who were supporting content creators like @fulltimegeek and @thejohalfiles to name a couple off the top of my head. They also didn’t just seek out people who were a part of a select group and helped vote for multiple new users. My wife was even gifted $100 SBD one night on a Steem DLive stream.

I was excited to see the first highlighted article referenced. I’ve been exploring in my own head where I feel that Steem is improperly valued or just doesn’t serve a good purpose. I’ll look forward to reading this soon and detailing what I find.

If the DLive portion was what could have pumped the fuel in me, this middle part was the spark to start my rocket. The author goes on to discuss Steem’s lack of centralized moderation and guaranteed free speech as a problem highlighting that child pornography has been posted by users. I have to feel this was included as part of a sensationalist push to spice up the reading but is half false and half the whole point of why were here.

This was another part that partially triggered me. I had been a fan of Matt Sokol on Steem long before he decided to leave. When I read his Medium post I was blown away with how much didn’t make sense to me. This was later cleared up in my mind when I seen that Matt was moving exclusively to a new platform. It’s my opinion that Matt, like DLive, found a home where he felt he could make more and wanted to trash the old friend before joining his new friends. What isn’t pointed out in that article is that Matt has since left the platform he left Steem for and returned to Steem. I think that makes clear that his “problem” with the platform obviously wasn’t a big enough issue to stay away from Steem and his new home wasn’t nearly rewarding as Steem was for him.

I guess this is a time to help shed light on vote bots on Steem. While you are correct that bots essentially let you pay them and in return they will vote on your post. This may sound like its just paying to get the highest payout but unless you’re familiar with the platform you probably miss key parts. That’s because attention within Steem, like most platforms, focus on what’s trending. Trending on Steem is aligned with a post’s value. When you take this view on you can see that vote bots are essentially a form of advertising. You are paying to move your post up in rankings in hope that more people see it and thus you reach a wider audience. I see nothing wrong with this and it definitely doesn’t affect the usability. If you don’t like this advertising model then there are sites that will tell you which posts are promoted so you can even see trending organically.

Final point to make is that delegations, how you share your valuable Steem Power with these bots, only takes 5 days to resend. The 13 weeks is the length of time it takes to power down Steem Power back to liquid Steem.

I don’t know jack about trading. I long realized that when I first started trading namecoin against Bitcoin on BTC-E ages ago. I quickly learned that my interest is in using these game changing technologies and not trying to make money by trading them. Because of this I don’t stand a chance to criticize or even share a positive idea about these sections. I hope you will read the OP yourself and tell me what you think about it’s synopsis of our market value.

I again want to thank @bravenewcoin for writing about Steem. If you follow crypto news then you’ll know that Steem doesn’t get equal coverage to other crypto platforms despite constant changes and news. The fact that Aditya covered us is worthy of our praise. I hope that by providing this review that future coverage can improve and may help to lead even more new users our way!

One huge bright side that has come of me digging in deeper to write this was finding out that Brave New Coin is already on Steem! If you’re not already following them then I highly encourage you to pound that follow button! They’ve long been one of my favorite sites to read new Bitcoin related news and finding their content native on Steem has been a huge win. Go check them out at @bravenewcoin!